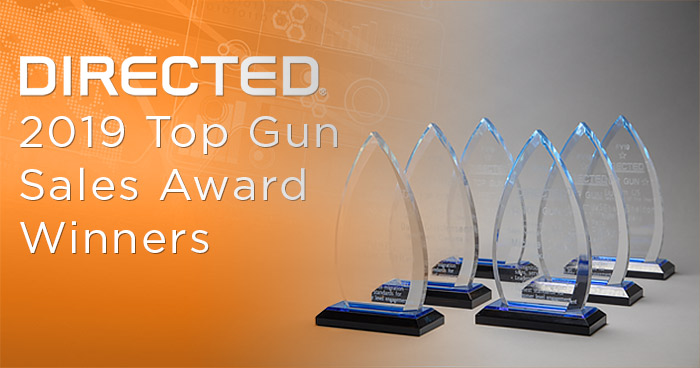 ~ Awards Honor Directed’s Commitment to its Dealer Base ~

This year’s winners are:

“Dedication to our dealers is one of the many things that sets Directed apart from the competition,” said Bob Struble, Directed CEO. These awards recognize those sales managers who live by these ideals every day. Our selection process was rigorous, and the competition stiff, so our Top Guns demonstrated truly exceptional performance. All of us at Directed thank and congratulate them on this outstanding achievement.”

Opus Marketing Group is headed by Jamie White who has been principal since January 2012. Opus covers the Metro and Upstate New York, New England, Mid-Atlantic and Michigan markets for Directed. According to Glenn Busse, SVP of Sales at Directed, “Jamie and team are truly rock stars! Their consistent dedication to our dealers is the reason they were chosen for this award.”

Al Fontane has been with Directed over 25 years. As Vice President of Sales managing over 75% of the US, he brings a wealth of sales experience to effectively manage a top-level sales team and develop marketing and sales strategies for Directed’s diverse distribution channels.

Reil & Associates is based in the Western US. Tim Page, regional Sales Director, had this to say: “Reil & Associates sales professionalism enabled them to dominate the Rocky Mountain territory. From presentations to follow-up and all steps in between, they are diligent in building partnerships with our dealers and carrying the message on Directed as the Technology Leader. When picking this year’s winner, their name was at the top in every category.”

Michael Dailey is Directed’s Central US Region Sales Manager. His 12V career began in 1981 at a shop in Arlington, TX which is still in business today. Michael has been at Directed for over a decade and excels at all aspects of sales management: Sales, Budgets, and Dealer interaction. Michael consistently brings new ideas, products, and sales opportunities to all his Dealers, making him a clear Top Gun.

Eben Sheldon started working at Directed in December of 2017 and has had quick success in the New England market, navigating a challenging competitive environment. Eben says, “Directed is a true family business, and I am happy to be part of the family. Thank you for this award!”

Best Reps (Mr. John Ripley): John is an experienced industry veteran and who initially represented Clifford which was then acquired by Directed. Glenn Busse says, “John delivers lots of service and support to our value-added retailers. He is a road warrior who is passionate and knowledgeable about the business, which shows by his performance.”

Dana Christensen: Dana came to Directed as Sales Manager for Western Canada in 2017, having previously represented Directed at AB Innovative Agencies. Dana brings with him an immense passion for Directed products and deep knowledge of the Canadian 12V landscape. Dana’s ultimate goal is to pass along his 20 plus years of education, knowledge and passion for the industry to Directed’s dealer partners.

Directed is a world leader in automotive electronics, the largest North American designer and marketer of consumer-branded vehicle security and remote start systems, and a pioneer in the connected car space. Its products connect more consumers to their vehicles than anyone else on the planet. Directed markets its broad portfolio (sold under Viper®, Clifford®, Python®, Autostart®, AstroStart®, Alcohol Detection Systems® and other brands) through leading national retailers and specialty chains. For more information, contact Chris.Pearson@directed.com.